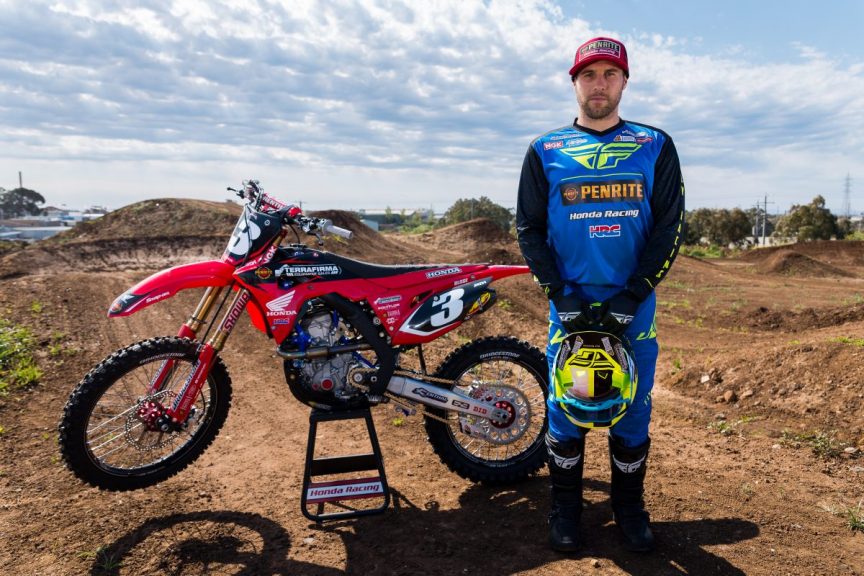 Penrite Honda Racing has completed testing and are ready for round 1 of the Austrlaian Supercross Championship in Queensland with the backing of their new sponsor Terrafirma Equipment Sales (TES.)

Terrafirma Equipment Sales has joined the team as a sponsor and in addition, they have taken title rights with the number 3 entry of Chris Blose for round one.  Team director Yarrive Konsky welcomes the new partnership and looks forward to great success with TES on board.

“This is fantastic, Darren’s company sells machines that we all use to build tracks, work on farms and rural land as well as in small and large construction businesses. The alignment fits and we will work hard to ensure it’s a tangible relationship,” said Konsky.

Chris Blose appreciates the inclusion and agrees with Konsky; “I work on my track at home with excavators, bob cats and dozers. Everyone who has a track or needs to build a track requires the machines Darren sells.  It’s cool to have Terrafirma Equipment Sales involved with our team and specifically me for round one.  I am pumped they chose to work with me.”

Managing Director of TES, Darren Assink has already seen tangible results from his association with the team and the team’s owner Yarrive Konsky.

“I have known Yarrive for a long time and have wanted to align with the team for several years.  The opportunity to join the Factory Honda Team this year was presented to me and I felt it was the perfect fit for Terrafirma Equipment Sales.  I also aligned with the supercar team Yarrive is associated with and achieved immediate success. People who buy our machines enjoy all forms of motor racing,” said Assink.

TES is a Brisbane based company, with Assink a fan of racing, having partaken himself back in the eighties. He is pleased to see the Supercross return to the Brisbane Entertainment Centre.

“The Supercross promoters are doing a great job in taking Supercross to the masses.  The Brisbane Entertainment Centre offers patrons great seating, a warm arena and the perfect atmosphere to experience Supercross.  4 of the 5 rounds are going to be on TV and we are proud to be associated with it and the Penrite Honda Racing team,” concluded Assink.

Round 1 of the Australian Supercross Championship starts this weekend, for more information go to www.australiansupercross.com.au