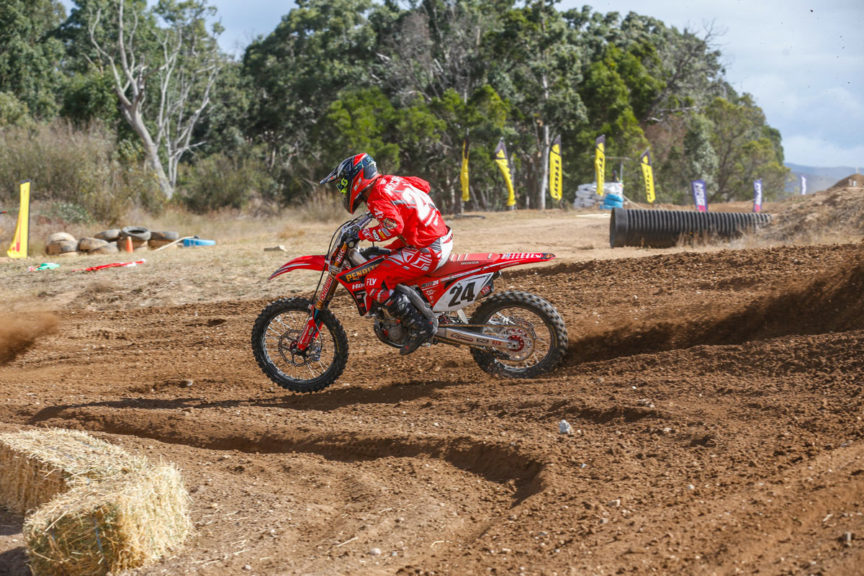 Penrite Honda Racing had a very solid start to round 1 of the MX Nationals over the weekend in Newry, Victoria after Brett Metcalfe qualified 2 nd and clearly displayed his hunger for victory.

With this positive start in mind, the South Australian immediately turned his attention to setting out his game plan for race one, “The team and I sat down post qualifying and made some changes to the bike in preparation for race 1. I felt confident we had a competitive pace,” Metcalfe said.

Once the race was underway, Metcalfe battled with several riders in Moto 1 to finish in 4 th place.

“I caught the guys in front several times but couldn’t find a way around them. I then felt we had gone the wrong way with some of the bike changes so post-race we decided to revert back to our original plan before Moto 2,” Metcalfe commented.

By the end of the first lap of Moto 2, Metcalfe was sitting sixth. When the half way mark came around, he had worked his way up to third and was making ground with the front-runners.

Unfortunately, with only two laps to go, Metcalfe was unable to finish the race due to a technical error.

Team owner Yarrive Konsky praised Metcalfe for his performance, commenting on his ability to do everything the team asked over the weekend, amidst the unfortunate technical fault.

“Brett and our partners have been super impressive and supportive. We were achieving everything we had set out to do and whilst this was a very disappointing finish for us at this round, especially after a successful pre-season, we are remaining positive about our position in the Championship and now shift our focus to round 2,” Konsky said.

Whilst Metcalfe was disappointed, he was extremely happy with his form and takes what he learned from this experience into his preparation for the next round.

“You don’t ever know where you will sit in the scheme of things going into round 1 of any Championship. This is a new program, a new bike for me and having not raced for 10 months, I take the positives from what we came away with. We qualified 2 nd , we were competitive in both races and we have a fantastic base to build off moving forward.” Metcalfe finished.

Meanwhile, Penrite Honda’s versatile desert team rider Callum Norton came away with a podium finish in the MXD, taking 3 rd overall after placing 2 nd in Moto 1 and 4 th in Moto 2.
The likeable young Victorian soared to the front of the pack in Moto 1 and dominated the race. Unfortunately, he was penalised and relegated back to second.

“It’s a bummer about the race 1 penalty but these things happen, I did what I thought was right although I accept the decision from officials and now we move forward to focus on Round 2. We had the pace in both Motos and I learnt a lot, I know I can’t afford a bad start against these guys.

We will spend some time on starts over the next two weeks and we’ll come out swinging with everything we have,” Norton said.

Team owner Yarrive Konsky was extremely pleased with Norton’s results; “Callum rode tremendously well and we are proud of his efforts! We will work closely with him to build on his position in the Championship,” said Konsky.

The team now turns its attention to Round 2 of the Championship in 2 weeks in Appin, NSW.