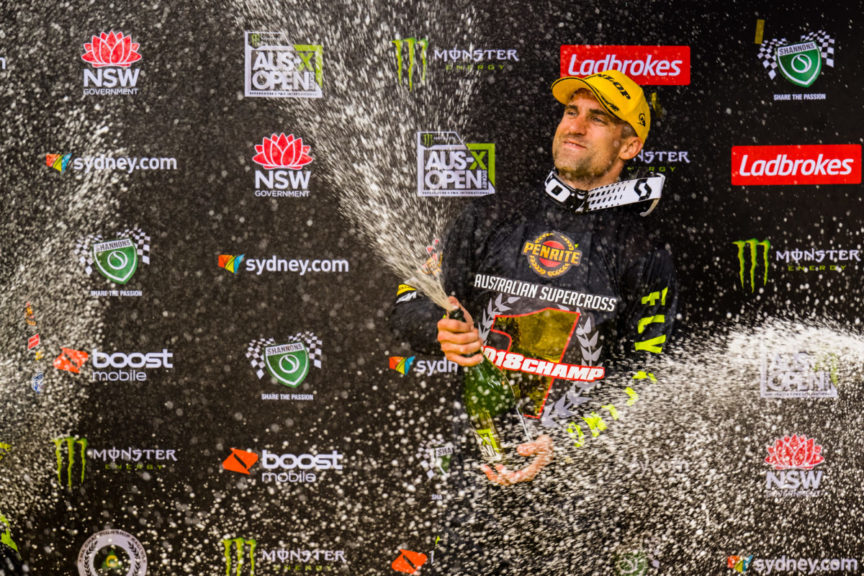 “I knew 4th place or better on the night would secure the Australian Championship. With Anderson not competing in New Zealand I go into the final round of the Oceanic Championship sitting third in points, trailing the lead by 9 points. There are 75 points up for grabs so anything is possible.” Brayton added.

Racing will take place on the Saturday night and run in three 7-lap finals format, which ensures plenty of excitement for punters to enjoy.

“The weather could also play a part in the nights results. I am just thankful to see another part of the world through my racing. Sky City is amazing and after visiting some tourist attractions I must say New Zealand is a place I would like to bring my family in the future.” Brayton finished.

Australian Brett Metcalfe is no stranger to New Zealand and their world champion riders. Metcalfe competed against New Zealand’s Ben Townley throughout his career. They both competed in the same team whilst in America.

“New Zealand has some amazing riders, the King Brothers, Ben Townley and Coppins have all proven to be world class. I raced against Ben and he was a fierce competitor. I am looking forward to racing in New Zealand and catching up with everyone,” said Metcalfe.

Metcalfe has enjoyed a successful 2018 Australian Supercross Championship and hopes for a strong finish in the final race for the year.

“Finishing 2nd in the Australian Championship was a good feeling; I’ve been stoked with the season in general. Noted I didn’t ride my best in Sydney but I was trying to race for the Championship at the same time so it was really important to focus on that,” said Metcalfe.

Metcalfe finished 6th overall on the night in Sydney where he secured 2nd overall in the Australian Supercross Championship. He currently sits 5th in the Oceanic Championship going into the final round this weekend.

“I am 9 points off 3rd and a further 9 points from 1st. Anything can happen in Supercross so I am just going to race each race as best I can and I hope that I end up on the podium this weekend and possibly the overall.” Metcalfe concluded.

Honda has a large contingent of riders competing this weekend in the SX1 in final round of the Oceanic Supercross Championship with not only Justin Brayton and Brett Metcalfe representing Honda but also Josh Hansen, Christian Craig and Jackson Richardson.

Team director Yarrive Konsky is looking forward to a strong finish for all Honda riders competing; “Everyone has worked hard. The riders, sponsors, staff and promoters have all done an amazing job. I believe Honda is in a position to finish well this weekend. There is a world class field and we have some amazing talent on our 2019 CRF450R’s.” Konsky said.

Over 20,000 people will be trackside to watch the biggest Supercross race ever held in New Zealand. Tickets are still available. Round 2 of the Oceanic Championship is this weekend in Auckland, New Zealand on the amazing Mt Smart Stadium. For more information go to www.sxopen.com