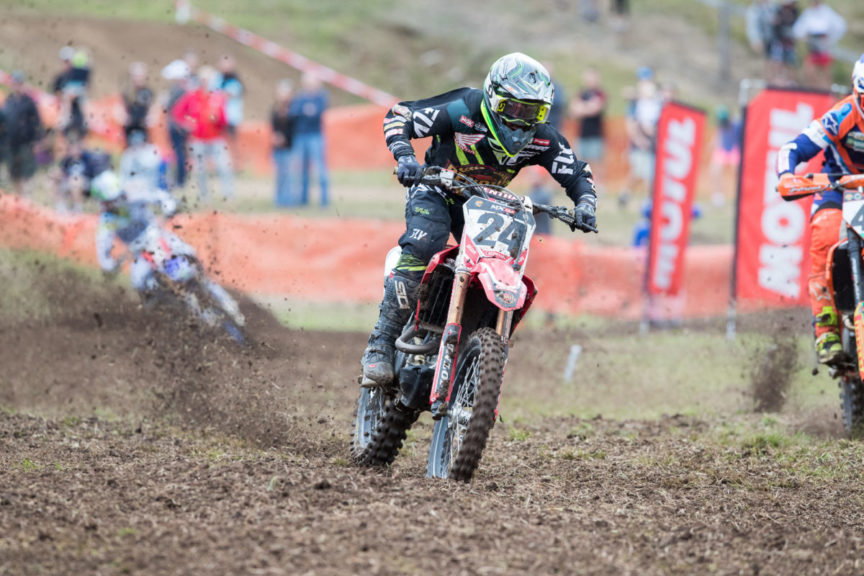 Penrite Honda Racing enjoyed a long awaited podium for MX1 team rider Brett Metcalfe at round 6 of the MX Nationals in Conondale over the weekend.

Metcalfe took 3rd and 2nd respectively in both races to claim 2nd overall.

“With a new team and a new bike, it can take time to get into a comfortable rhythm. This weekend we got there and used everything we learnt from the last five rounds to do it. The results are very rewarding for all involved,” said Metcalfe.

Metcalfe came from 7th in race 1 to finish 3rd, the track proving difficult in areas to push into the top spot.

“I got a decent jump in the first race but I wasn’t aggressive enough in the opening laps and found myself racing hard to catch the lead group. We had the pace but I made it hard. I was happy with 3rd but I knew we could improve the set up for the second race,” said Metcalfe.

The team collectively discussed the areas that could be improved and agreed to make some significant changes going into race 2.

“We were all nervous, but we knew we could improve the bike. Marty and the team were spot on. We were strong in race 1 but the bike was on point in race 2.” Metcalfe added.

Everything clicked in race 2, Metcalfe regrouped following a crash to catch and pass riders on his way to 2nd. Metcalfe also achieved the fastest lap of the race on lap 14 of 15.

“We had a fast motorcycle in race 2; it was unbelievable, the way it turned, accelerated and handled, was just awesome. We had the pace to contend for the lead. I am so happy for everyone! This was a fantastic result.” Metcalfe finished.

Team director Yarrive Konsky was very impressed with the teams’ efforts and the way Metcalfe rode in both races.

“It’s always hard making changes but we needed to turn things around. The Honda CRF450R is a great bike and Brett is a champion rider so finding the ideal set up for him has been an integral part of our journey so far. I am very proud of everyone’s efforts. Brett is a mature rider and we worked through everything together and that is what makes this result so rewarding,” said Konsky.

The team plan to test before rounds 7 and 8 to ensure the podium finishes can continue.

“We are still learning and we can improve, we need to keep testing and developing to stay as competitive as possible. This is not just about rounds 7 and 8, it’s also about next year. Everything we are learning and improving on will help us now and into the future.” Konsky finished.