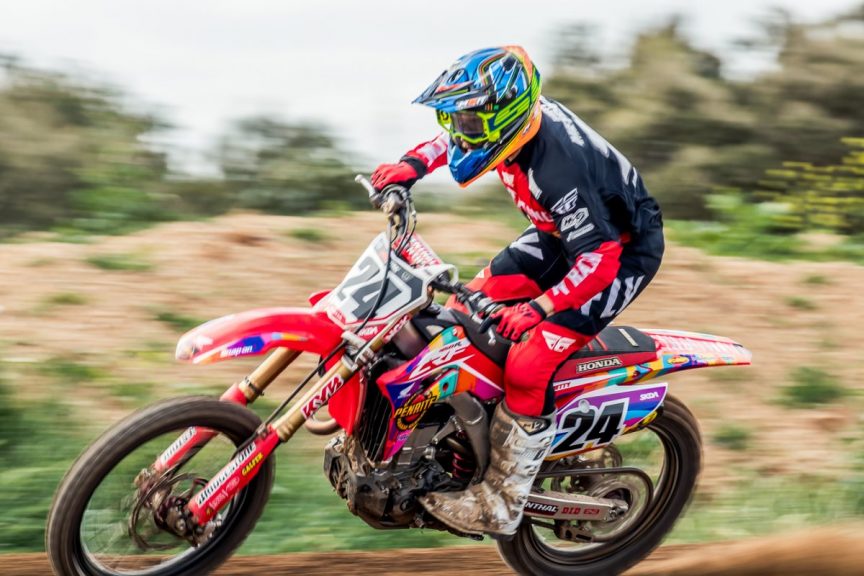 South Australia’s most decorated racer went undefeated on his way to winning two South Australian Championships on the weekend (29 and 30 of August).

“Its been almost 20 years since I last competed in our state championship and to win 18 races from 18 starts and two championships this year in front of my kids is priceless, to share it with them has been really special.  The last time I raced the championship I was just a kid so it’s really come full circle as my kids also raced the championship. Overall, it has been an amazing time for my family and I”. Said Metcalfe.

Whilst 2020 has been a strange year, Metcalfe has used this time to fully recover from years of injuries.

“I must admit this is the best I have felt in years.  Most years, riders’ race with injuries and sometimes it hinders their results.  I have used this year to fully recover from all of my injuries and I feel strong and fit” said Metcalfe.

The Penrite Honda team have remained active throughout the year and continue to participate in as many races as possible.  Metcalfe will continue his racing this weekend in Robe, South Australia.

“I love racing and my children both started racing this year.  There is still a lot of state-based racing happening and I look forward to racing as often as I can.  I still hope the nationals get up and going” concluded Metcalfe.

Metcalfe’s presence has been well received and the graphics he raced with over the weekend to support the Children’s Hospital received rave reviews.  Team owner, Yarrive Konsky appreciates everyone’s efforts and thanks the kids who took the time to draw the designs and Sam from SK Designs for donating his time and product.

“This is something we will try and do every year, it was great to engage with our young fans” said Konsky.