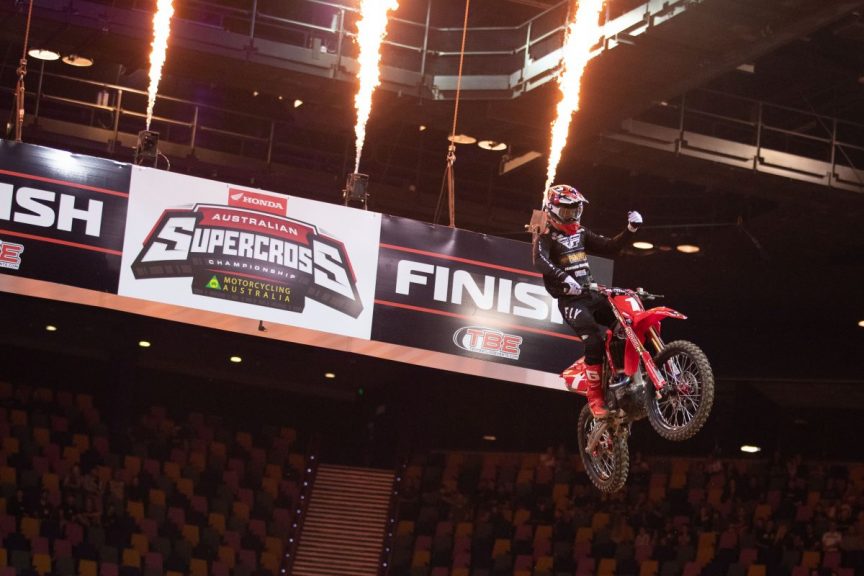 Reigning SX1 Champion Justin Brayton raced flawlessly in Brisbane on the weekend, winning his heat race, super pole and the two finals on his way to the overall win on board the CRF450R.

“I couldn’t have scripted this any better, what a dream start.  The whole team worked well and I just enjoyed being back down under in front of the crowd. Also I can’t explain how cool it was to see all of the Brayton FLY jerseys out there; it’s something I will remember for a long time,” said Brayton.

“I really gelled with the track quickly, my bike felt awesome and I was enjoying it out there,” said Brayton following super pole.

In the first of two finals, Brayton and Metcalfe went one and two, breaking away from their nearest rivals.

In the final race of the night, Brayton took the lead from the opening lap and cleared away, winning convincingly. Metcalfe was sitting in 2nd until he was pushed wide on the final corner.  He remounted and finished 5th. The results of both races combined gave Brayton the overall win and saw Metcalfe placed equal 3rd. (4th on count back)

Brett Metcalfe looks to improve for round two stating; “I am bummed with the overall result but I blame myself, I was pushed so wide in the final turn that there was no track left.  The first final was good but I need to be better so I will be for round 2, I’ll work to make that happen.”

SX2 riders Chris Blose and Mitchell Oldenburg kicked off their campaigns with positive results in their heat races.

Blose qualified first, won his heat race and looked poised for a great result in the finals.

“Qualifying and my heat races were perfect. The bike was strong and I felt comfortable,” said Blose.

Mitchell Oldenburg also looked strong early on for his Australian debut, winning his heat race and showing enormous grit and determination as he fought his way to the front. When the two lined up for the first of the two finals, as soon as the gate dropped, disaster struck.

“I couldn’t believe it, a rider ran in way to hot and caused a pile up, I was along for the ride. I got up as quickly as I could and charged back to 4th,” Blose said.

Oldenburg clawed his way back to 5th in the opening final.

In the second of the two finals, both riders were determined to close the point gap on their rivals. Blose pushed to take 2nd which gave him 3rd overall.

“This is not what I came here to do. It’s a short Championship so every point is valuable. I want to win! I will take away the positives; the bike was strong and we are fast so I’ll use that more to my advantage in Adelaide this coming weekend.” Blose finished.

Oldenburg’s night ended with a collision with another rider so he had to work hard to get back to the front, relegating himself to take 8thoverall.

“I didn’t race as well as I’d hoped, the competition is fierce and being my first night racing here in Australia I didn’t quite know what to expect. I want better for me and the team so I have taken a lot away from this and am focused on round two,” Oldenburg said.

Overall, the team are pleased with their results, dubbing it a solid start to the Championship but know there are still areas that need to be stream lined.

“Justin is well prepared to defend his Championship so we are working towards this, as well as ensuring we can get the best results from all of our guys,” said Team director Yarrive Konsky.

“We will work efficiently to get everyone more settled on the bikes. We have some parts we will test with Metcalfe as well so it will be another massive week but our team is up for the challenge.” Konsky finished.

Round two of the Championship heads to Adelaide this weekend the 19th of October. For more information on the Honda Competition range including the CRF450R and CRF250R, visit: http://motorcycles.honda.com.au