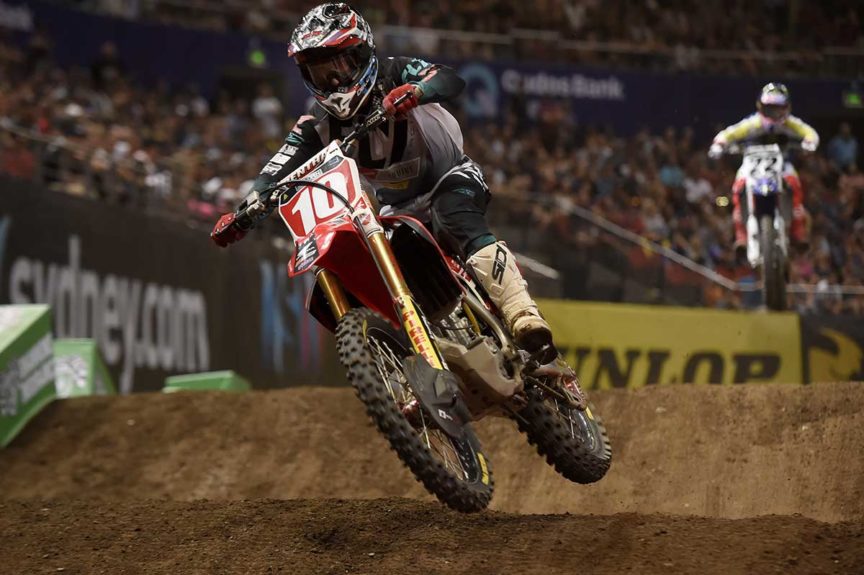 Honda Genuine Racing Team rider Justin Brayton has won the Australian Supercross Championship aboard his Honda CRF450R.  The consummate professional displayed an unnerving approach in his pursuit to win in his first full season in Australia –

“I am thankful for the opportunity to come and race, Australia is a beautiful country with many beautiful places and people.   The team and I had a goal and we stuck to it throughout the championship.  This has been an unbelievable experience, I couldn’t be happier, said Brayton”.

Justin won three of six rounds on his way to victory.  Overall Justin finished on the podium 5 of 6 rounds, with a 2nd and 3rd respectively in the final two rounds in Sydney on the weekend (12th / 13th November).

“This weekend was tough, I qualified first both nights.  On Saturday I made a mistake and handed the lead to Chad with a few laps to go.  On Sunday I was taken down in the first turn and had to come from way behind.  It was a rewarding ride, coming from last and finishing 3rd, said Brayton”.

Adam Enticknap finished the championship in 8th overall.  The “7deucedeuce” was happy with his finish and enjoyed his time in Australia –

“The indoor was tough and intense. I am happy I made the main event in the final round. I pushed to the very end.  Everyone in Australia has been amazing, it’s truly been an awesome experience, said Enticknap”.

Ford Dale rode the final two rounds in the SX2 class (250cc).  The 2012 Australian Champion made the main event and placed 11th –

“That was tough, not racing for 16 months and coming out to race in the toughest competition known to Australia.  I am happy with my overall speed, however my fitness and race craft needs a lot of work, said Dale”.