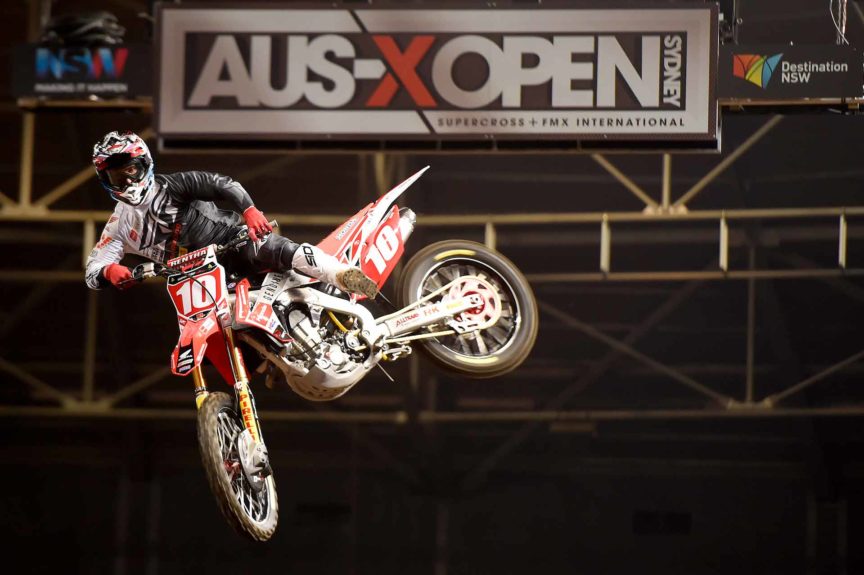 Justin Brayton will return to defend his Australian Supercross Championship in 2017, arriving in Australia next week to begin training with championship winning Honda team.

Brayton enjoyed his time in Australia last year and is looking forward to the up and coming championship; “This is the third time I will compete in Australia and I am looking forward to defending my championship and seeing more of the country. My wife and I have spoken openly about making it our home after racing, it truly is beautiful.” Said Brayton.

“Working with Honda and the team is every rider’s dream and I am confident we will have a competitive program again this year.” Added Brayton.

“This team has always achieved great success and I am excited to bring my knowledge and strengths to their program, they have a great line up of riders and technicians and together we should make a formidable team.” Said Foreman.

3 time Australian Supercross Champion Gavin Faith will also return to line up in the 250 class.

Faith has competed in Australia for 7 years and is returning following another successful win in the American Arena X Championships earlier this year.

“I love Australia, the country and people. The team and I have been very successful and they run a professional program. Finishing second last year was tough, especially after scoring no points in Round 2. I want to contest for the championship and I know we can.” Added Faith.

The team is also looking for great things out of Australian MX1 Jesse Dobbson.

The young Queenslander has proven to be a podium contender and is pleased to represent Honda in this year’s Supercross season; “To represent Honda is unbelievable and to have the opportunity to learn from Brayton is priceless. I started the year working with Ben Townley and that has proven invaluable. I want to prove to myself and the team that I deserve this ride.” Dobbson said.

The 2017 Australian Supercross season kicks off on the 23rd September with round 1 held in Jimboomba, QLD.