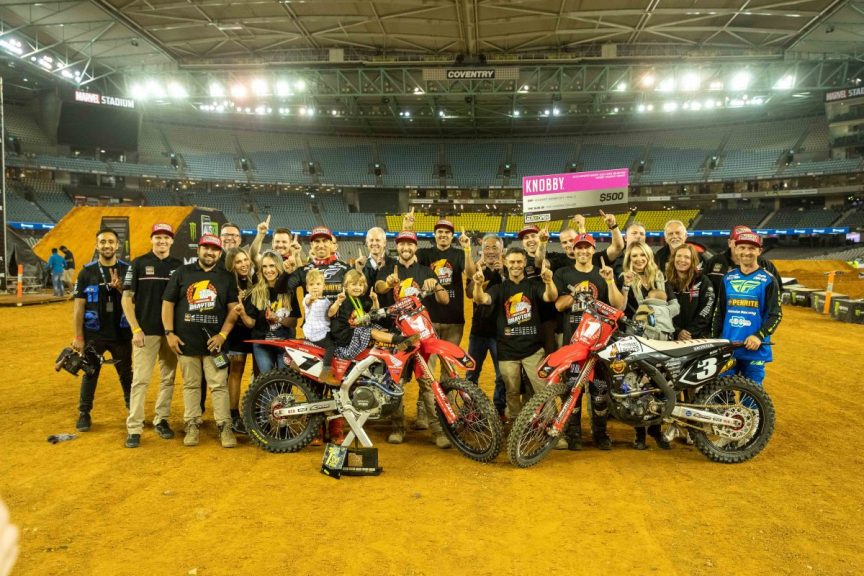 It’s been a year of great triumph and success for the Penrite Honda Racing team in 2019. Winning three Championships and taking four podium places, all in the same season has been an incredible achievement which many race teams don’t get to experience. Everyone at Penrite and Honda are truly grateful.

Team director, Yarrive Konsky is the man working tirelessly behind the scenes to ensure his team succeeds. For those who know him; they know his dedication to the sport. He lives and breathes motorsport and after the well deserved double Championship victories in the Australian Supercross series, he looks back on the year that was.

“I am so thankful for the people we have in our program, the staff, the sponsors and the riders.  I am most grateful for the relentless efforts our riders put in.  They didn’t have it easy this year with some of the injuries and challenges that always come up in racing, but what impressed me most is they never gave up.  That sort of dedication is what elevated everyone’s performance,” Konsky said.

For the fourth time straight, Justin Brayton won the Australian Supercross Championship, this year he also finished 2nd in the Oceania Championship.

From the outside looking in, the 2019 season seemed like another fairytale for Brayton in Australia and the Penrite Honda Racing team. Australian fans are used to seeing him win, since his first year competing in Australia back in 2016 where he flew out of the gate at round 1 in Jimboomba, Queensland with the #10 plate on his CRF450R.

However everyone on the inside knew it wasn’t, he achieved everything this season with four broken ribs and a punctured lung, which is something difficult to fathom. It’s any wonder he got the HRC ride for 2020 with American Honda. Putting his skill set aside, it’s his professionalism and drive to win at all costs that really elevates Brayton to another level.

Each year he has come to compete in Australia, Brayton seems to have faced different challenges. His injuries this year would have sidelined most from even light duties let alone the marathon that Supercross riding demands of the human body but his tenacious desire to succeed was clearly evident as he battled his biggest challenge – himself.

“I think this year was a different kind of challenge for me, everyone knew we were after the overall win for the fourth time. Pressure is pressure; it’s always there when the stakes are high so it was the same plan as always, because each year since my first all we have wanted is to win. Then getting the news that I had broken 4 ribs and punctured my lung two days after winning round 2 back in South Australia was devastating. I didn’t know if I was going to be able to ride so there were some tough conversations with everyone about what we should do, what I should do. It really changed our game plan and there were times I was really concerned that what we had worked so hard for could be taken away from us.” Brayton said.

“I was in a lot of pain, it was really taxing on me but I wanted to go for my fourth straight win, it was so important not only for the team and everyone who puts in but for me personally to keep going. It was a box I needed to tick. Round 3 and 4 were hard and my crash in round 4 didn’t help my Championship defence. It was also difficult not telling the public what I was dealing with, I think people could see I wasn’t riding at my best, but the team and I soldiered on,” Brayton continued.

Brayton rebounded in the final round, 5 weeks post injury and rose to the level we have been accustom to seeing.  He was the fastest racer in the three finals on the complete track in Melbourne and battled through to win his 4th straight Championship.

“The positivity in the team helped me keep going, my wife really had to do double duties, looking after me and the kids but everyone pulled together and we did it.  This win means the most, I was able to teach my kids and prove to myself that giving up isn’t an option, not when you are so close to achieving something you work so hard for.

Chris Blose came to Australia in 2017; his explosive debut for the team at the final round of the Australian Supercross season in Sydney sparked a new relationship. Blose came out swinging to take the final round win in 2017. He was impressive to watch, with his aggressive winning spirit and he had every intention to race the full season in 2018. Unfortunately he suffered a knee injury and hopes of that return were put on hold.

2019 was to be his year, the year he was a true contender and the year he was to take that long awaited overall SX2 Championship victory. Again, not all of it was without setbacks and challenges.

After crashing in the first two rounds things were looking shaky for Blose, his dreams of winning were starting to fade. To get his mind right and to ensure he was mentally prepared to win, he went back home to America to see his wife and new born son.

He returned with a renewed mindset and energy which saw him go on a podium streak, going 1,2 and 3 respectively to claim his first ever overall Championship.

“It was insane to come away with the overall, it feels like it’s been a few years in the making for me, it wasn’t easy but we got there, I am so proud! The team was fantastic in realising what I needed and the trip back home made all of the difference,” Blose said.

Blose not only took the Australian Supercross SX2 Championship but he also secured the Oceania Championship which was an unexpected bonus for him and the team. Blose is scheduled to return to defend his title in 2020.

Brett Metcalfe narrowly missed out on third in the Australian Championship but managed to finish 3rd in the Oceania Championship.

“It has been tough year for me, a broken back and broken finger which required micro-surgery.  There were some highlights for sure but they were few and far between. I will take the 3rd in the Oceania Championship as a positive highlight for the year but I will work towards being where I know I should be next year.” Metcalfe said.

For his first time racing outside of the US, Oldenburg was a fierce contender and the team is pleased to welcome him back for the 2020 season.

“I learned so much throughout the Championship.  It was a great experience full of valuable lessons and I can’t thank everyone enough. I look forward to 2020,” said Oldenburg

With this positive season behind them, Penrite Honda Racing are making a trek across the Pacific Ocean to compete on the World stage of Supercross.  Their much anticipated debut at the first round of the American Supercross on Jan 4 in Anaheim, has been a long awaited dream for Konsky

“I am excited to be a part of the biggest Supercross stage in the World.  Our plan is to do our best and see where we can finish against the best teams and riders.” Concluded Konsky.

The team is nervously excited about their new challenge.  The team is headed up by Australian rider Luke Clout on the CRF250R, and podium Supercross place getter American Mitchell Oldenburg.