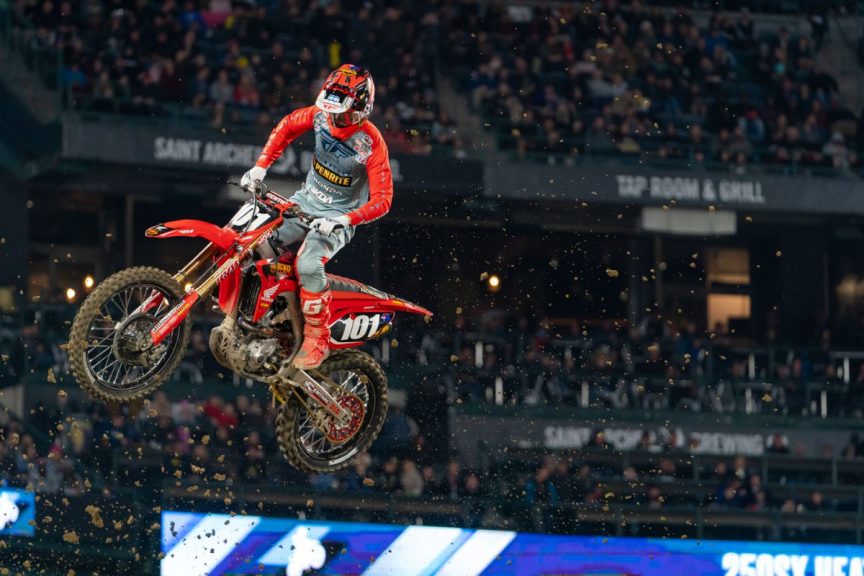 Penrite Honda Racing’s debut at the Monster Energy AMA Supercross in Anaheim, California was as exciting as it was challenging for the team.

The day started positively for the team in Qualifying, with Mitchell Oldenburg taking 7th and Luke Clout 11th.

In the heat, Clout was on a mission and showed great speed on his way to 5th. He was looking strong heading into the main but unfortunately things didn’t go his way and a crash ended his night, finishing with a DNF.

“My riding was good for most of the day but I am just so bummed, I was sitting in 8th and pushing hard but I made a mistake and it cost me really big. I’m a bit banged up but there are a lot of positives to take away from the night, its been good to see where I’m at over here against some of these guys and I know I will only get better from here.” Clout said.

“I havant had too much time on the 250 and the whoops were a challenge for me tonight but I will keep grinding, I’ve only been back on the 250 for 3-4 weeks and its been about 4 years since I’ve been on one so its an adjustment. Only upwards from here.” Clout added.

After suffering a small crash in the Heat race, Oldenburg managed to finish 8th. In the Main Event he crashed again, which resulted in a 16th overall for the night.

“It was a tough night for me so I am looking forward to being better for the next round, I know what I need to work on before St Louis. The team are great and the bike feels good so we are on track for stronger results.” Oldenburg said.

“After the Heat I felt sore because I had a couple of crashes but mentally I’m in a really good spot so as much as I am disappointed in tonight’s result, I need to keep in mind that its only race 1 of 10, I have a bit of time for redemption.” Oldenburg added.

Penrite Honda Racing team owner, Yarrive Konsky felt the pain of his team after the Main Event but noted the importance of continuing to move forward.

“The positives from tonight are, we have learnt a lot and have already moved on, as we won’t dwell on any negatives. Both boys have potential that they haven’t displayed and we will work with them as a team to achieve the results we want in St Louis.” Konsky said.

Although a tough night, Konsky is thankful and humbled by the support the team have been shown and is looking forward to the next round.

“Everyone in America has been fantastic towards us and we can’t thank our partners and the American fans enough. We will continue to push forward and we look forward to seeing everyone at round 2.” Konsky concluded.

The team now prepare for round 2 on January 11th, in St Louis, Missouri.