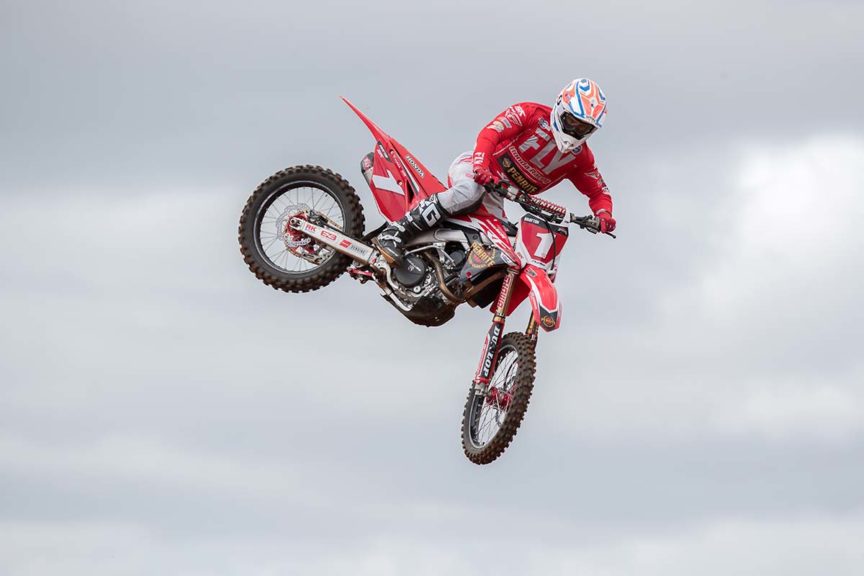 Positive testing for Penrite Honda in the lead up to round 2 of the Australian Supercross Championship.

Following Brayton’s 450 class win at round 1 and Faith’s second in the 250 class respectively; the team have worked hard during several tests to perfect their outfit for round 2.

Brayton’s first priority during these tests was to get the most out of the tyres he would run; “Dunlop is constantly developing new tyres to be ahead of their competition.  The tyres the team use were different to what I had ridden with at home so it is crucial for me to get used to them. Testing went better than I expected and I was able to get comfortable quickly.” Said Brayton.

The team also put time into working on engine mapping, where both Faith and Brayton were pleased with the results and the gains their bikes made with Vortex.

Team manager Jay Foreman believed the tests were beneficial; “Going into round 1 we had limited time to test.  In America they run different fuels to us.  Richard from Vortex worked hard to develop our mapping and the riders felt the improvement instantly once they hit the track. The VP Roo 100 fuel is very competitive and our complete package now is much better.” Said Foreman.

Faith has also received a boost with two new motor configurations to ensure he rides to his full potential.

“Round 1 was tough, I still felt jetlagged and I struggled.  The testing we have done in the lead up to round 2 has been invaluable and I have high hopes for my results this weekend.” Said Faith.

Jesse Dobson has spent little time on the motorcycle since round 1 due to a practice crash which resulted in shoulder injury.

After some down time, Dobson rode this week and feels comfortable back on the bike and remains hungry for a solid finish this weekend.

The team prepared for round 2 in Bacchus Marsh this Saturday night.  Tickets are available through www.ticketbooth.com.au