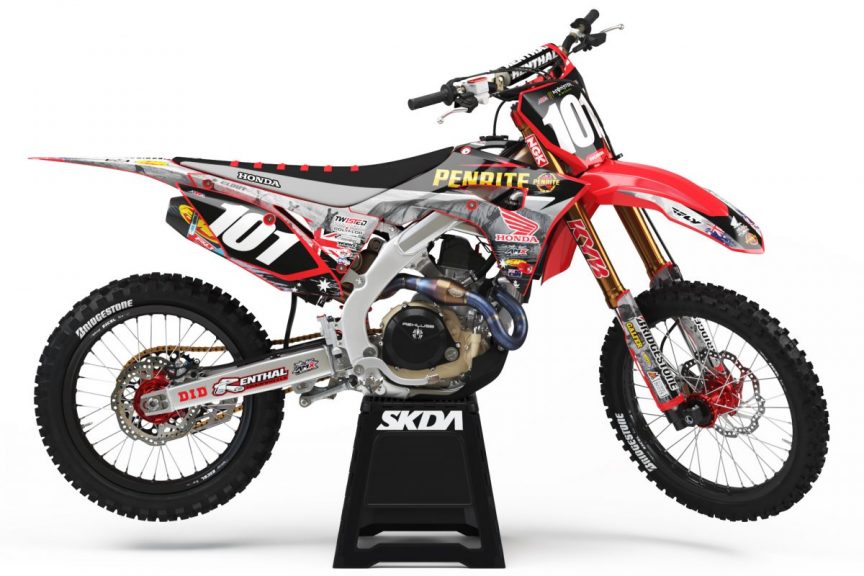 The Penrite Honda Racing Team will celebrate Australian Day this weekend in round 4 of the AMA Supercross Championship – Glendale, Arizona. Team riders Luke Clout and Mitchell Oldenburg will compete with a custom made graphics kit from SK Designs. Sam Morton, the director of SK Designs welcomes these opportunities.

“It’s cool to do something for Australia Day, especially with the devastating bush fires that have swept through our country. The design incorporates our wildlife, beaches and iconic landmarks.  For one week we will also be donating $50 from every kit (full graphics and seat cover) to the Red Cross”.  Said Morton

The Penrite Honda team have also donated 100 hats to the promotion.  Each kit sold next week will come with a hat, valued at $40.  The teams naming partner is an Australian owned company. Penrite Oil 100% supports the team’s international efforts and admires the results they are achieving.

Penrite Oil is more than 90 years old and its racing heritage comes from the family’s love of motor-racing.   Penrite’s director of Motorsport, Jarrod Harding acknowledges that racing throughout the world aides in their development of motorcycle lubricants and the global exposure the AMA Supercross Championship achieves is of the highest level.

“We are an Australian Owned company but our motorcycle lubricants have been developed by champions from all over the world.  We are proud to be aligned with some of the world’s best racers and we are honoured to be racing in front of the biggest audiences in the world” said Harding.

The Penrite Honda Team achieved their best results so far in round 3 and are set to continue their push forward.  Team director Yarrive Konsky feels that they are all working together towards a common goal.

“6th and 7th for Clout and Oldenburg respectively last week was good but we want to be further up.  It’s a process and we need to be patient and respect that.  I feel we are making progress each week” said Konsky.

Mitchell Oldenburg has moved to 9th in the championship and wants to continue his progress forward this weekend.

“I know I have already said it, but it’s been difficult to race at full speed as I haven’t been able to push it to hard after my crash in A1.  I am still not 100% but I feel better and I hope my results will show that” said Oldenburg.

Clout had his best ever career finish last week.  A 6th place in the final has also put him inside the top 10 overall.

“I capitalised on some mistakes made by other riders but I made sure I was there to do that.  I know I have a lot of work in front of me but the team and I are committed” said Clout.

The team asks you to support SK Designs  www.skda.com.au

This coming weekend is round 4 of the AMA Supercross Championship.  For more information go to;