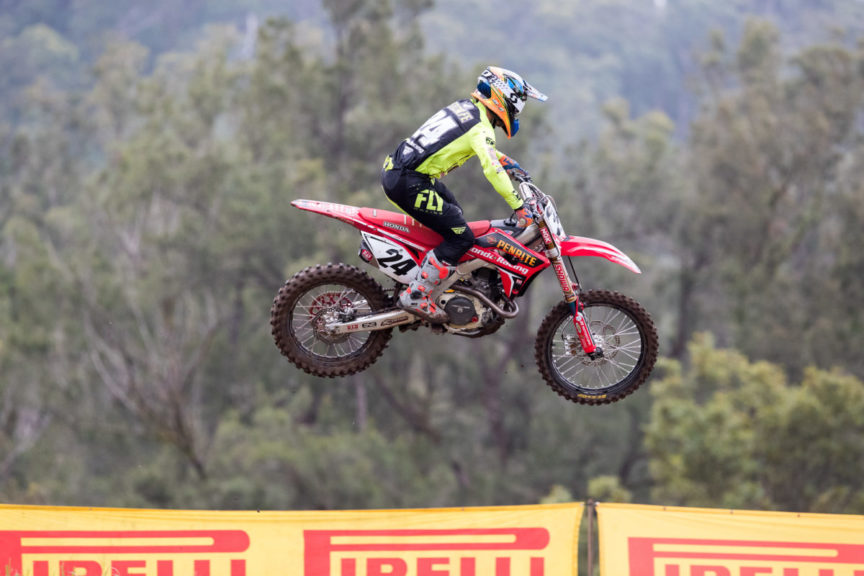 Penrite Honda Racing aim to take on round 7 and 8 of the MX Nationals with the same tenacity displayed at round 6, after a very solid few weeks of racing results for both team riders.

Brett Metcalfe has expressed his determination for the top results to continue after his season best performance at round 6 in Conondale.

“We had a great weekend of racing in Conondale so to ensure the flow carries through to the remaining rounds, the team came to South Australia to continue testing and I feel we have found a great setting for my riding style. I am looking forward to racing up front again this weekend,” said Metcalfe

After racing from last to 9th at Hattah on the CRF450R last weekend; Callum Norton has decided to make the shift to the 450 (MX1) class for the remaining rounds of the Nationals Championship.

“I was originally contracted to race the Desert Races with Penrite Honda so I’ve spent all year on the 450 preparing for Finke and Hattah. Then I decided to do the Nationals and jumped on the CRF250R for that, but I’m big guy and changing back and forth is harder than I thought it would be. After 6 months on the CRF450R I feel it’s the best place for me, plus it’s where I want to be next year,” said Norton

Penrite Honda’s new structure entering the second half of the Championship has also proved successful for the team and riders. Team director Yarrive Konsky is pleased with the way things are working so far.

“You can’t expect change if you don’t make change. Things didn’t go to plan in the first half of the season so we re-assessed and what we have come up with has had a significant impact.” Konsky said.

Rounds 7 and 8 of the MX Nationals are in Newcastle. For more information, visit: www.mxnationals.com.au