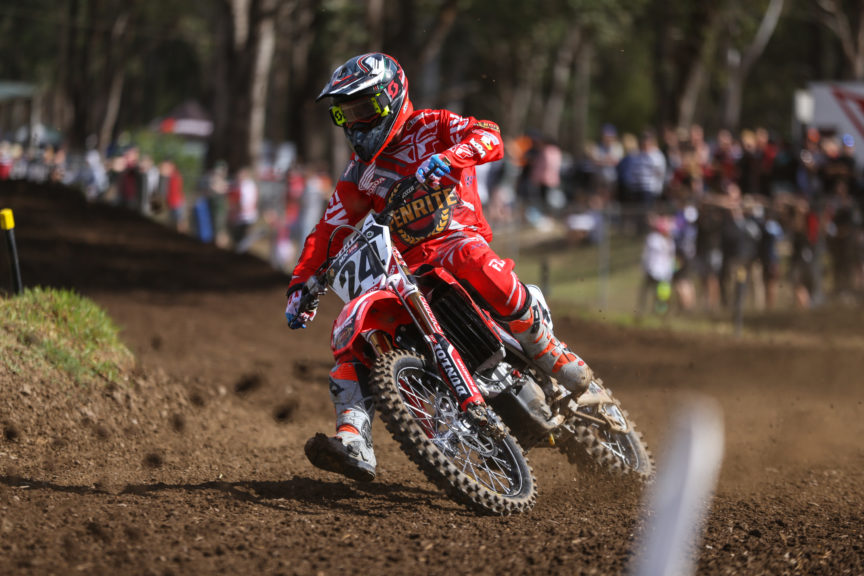 Brett Metcalfe; two time runner-up of the American Motocross Championship and front runner of Honda’s MX1 outfit for 2018 is well prepared for Round 1 of the MX Nationals this weekend in Newry, Victoria.

The 33-year- old set his sights on achieving the ultimate prize of an Australian MX1 Championship well before he arrived back in Australia in January, after competing overseas for the last 18 years.

“American Honda provided me with a bike to start practicing on last year and since my return in January I’ve had a rigorous testing schedule. Our preparation has been great and we are ready to race,” said a positive Metcalfe.

Metcalfe feels confident going up against an impressive field of competitors this season; “There are many fast guys in Australia who could race inside the top ten internationally.  I expect fierce competition from several riders but I feel I am ready to compete week in week out for podium finishes.” Said Metcalfe.

Team director Yarrive Konsky is confident in Metcalfe’s abilities and is pleased with the teams’ progress and plans moving into the beginning of the Motocross season.

“In the lead up to this first round of the Nationals, the team have been working really hard to ensure we get the start to the season we all hope for. Brett is a true professional; his goals are very precise and align with everything we want to achieve as a team this year in the MX1.

It’s also fantastic to have Tim Vare assist in the management of the factory program and Josh Mannix working on the tech side of things.” Konsky said.

Tim Vare is pleased with his new position with the team, working closely with Metcalfe to ensure positive and consistent results.

“Working with Factory Honda was something I dreamt off and I am excited to take on this new role.  We have our feet firmly planted on the ground and we will take each weekend and challenges as they come,” said Vare.

Honda Australia’s Brand and Motorsport manager Glyn Griffiths added; “The MX Nationals is a significant part of our racing commitment. The ten round championship exposes the Honda brand,
motorcycles and programs nationally.  Justin Brayton and Jeremy Martin are proven race winners on our 450 and 250 so we hope to achieve the same successes locally with Metcalfe.”

Round 1 of the MX Nationals will be held at Newry, Victoria on the 15th of April. For more information visit: www.mxnationals.com.au