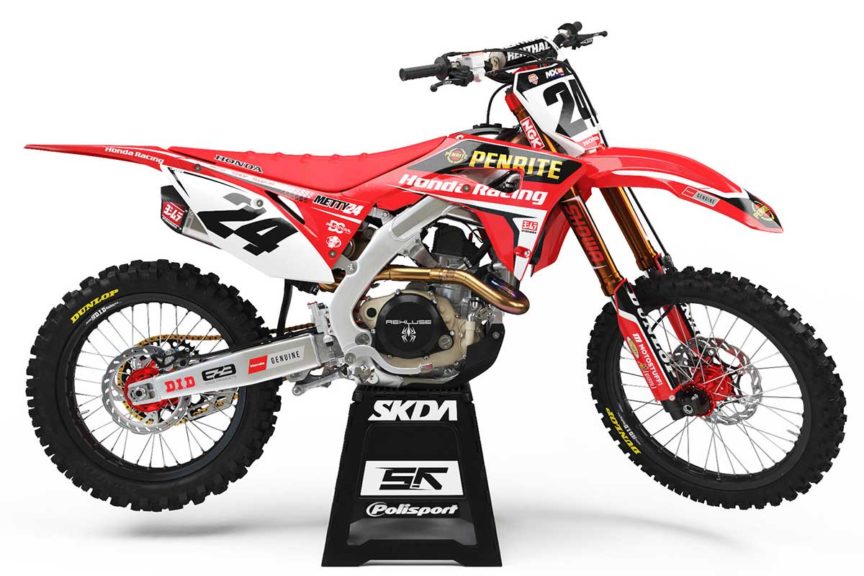 Additional details have been announced on Honda Motorcycles Australia’s factory motocross and supercross team for 2018, under the Penrite Honda Racing brand in an expanded effort from team owner Yarrive Konsky.

Konsky’s team has captured the past two Australian Supercross Championship SX1 titles with Justin Brayton in a supercross-only operation, while the factory team had been under the ownership of Team Honda Racing operated by Paul Free.

Following the collapse of Free’s program at the end of last year, it was revealed last November that South Australian Brett Metcalfe would be Honda’s sole factory MX1 rider outdoors for this season in a team organised by Konsky.

“It’s been a very strong and successful partnership with Honda,” Konksy commented. “We have achieved some incredible results over the years, which include seven overall championships and three second-place finishes.”

Penrite Honda Racing will also support Todd Waters as he heads to the US for the Lucas Oil Pro Motocross Championship, before returning to contest supercross as part of the local team later in the year. Further information on the team’s supercross line-up will be released closer to the series.

“This team completes a massive racing program for Honda,” said Honda Motorcycles Australia brand and motorsport manager Glyn Griffiths. “We are excited to see what Todd can do in America. Brett is a terrific asset and his best results in America were achieved on a Honda, he really has settled in well and his experience has made a significant difference.”

The Penrite Honda Racing team’s confirmation comes following the recent announcement of a factory desert program, as well as the new Ride Red privateer initiative that will support a selection of riders through 2018. Penrite CRF Honda Racing will feature as the manufacturer’s 250 team, fielding Jackson Richardson and Kyle Webster.