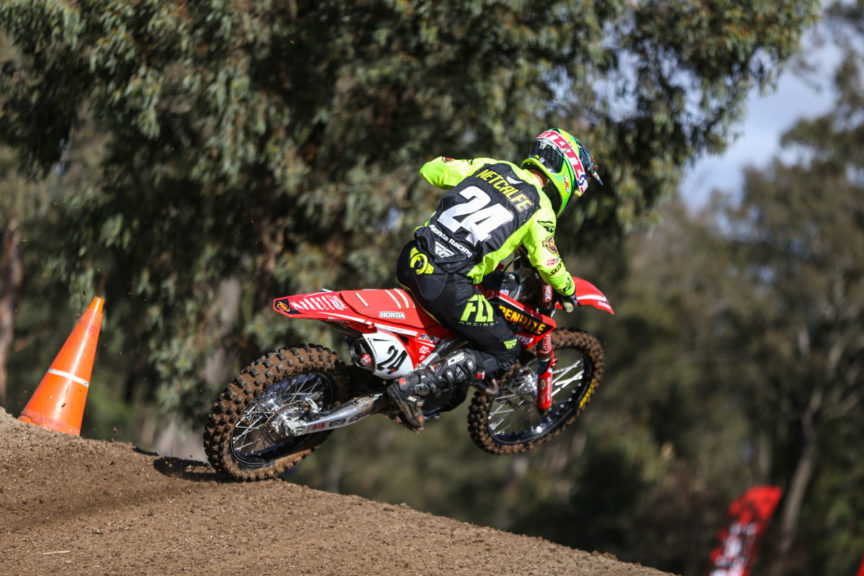 Brett Metcalfe and the team at Penrite Honda accept they need to find a solid race set up ahead of Round 3 of the MX Nationals held in Wonthaggi, Victoria.

“When the track has moisture we are fast but as it dries we lose race pace because of our setup, this is an area we need to focus on,” said Metcalfe.

The day started solidly with Metcalfe taking pole position ahead of the two 30 minute moto’s.

“We made some minor changes during practice and qualifying and we improved the bike considerably. I was really happy we took 1st in qualifying but it didn’t translate to race pace following further changes post qualifying,” Metcalfe continued.

Race 1 started well with Metcalfe putting pressure on the lead rider in the beginning of the moto for first, however the changes between qualifying and racing didn’t translate and Brett struggled to maintain the gap to 1 st , eventually losing 2 nd place with one corner to go.

“I was bummed to lose 2 nd to Gibbs on the last lap in the last corner. I struggled during the race to maintain the speed of Ferris. I was pushing hard to stay with him and I was using a lot of energy,” Metcalfe added.

The team made several changes for moto 2, which consequently set them back in the drying conditions.

“We went the wrong way in moto 2, we made a call and it was wrong and the team and I realised that we need to continue testing. I am confident we have podium finishes but we need to find race pace and perfect our setups,” Metcalfe finished.

Team Director Yarrive Konsky echoed Metcalfe’s comments; “This is our first year racing the new Honda 450R in motocross and we don’t have any data on these tracks, more so we have been testing on well prepared and watered tracks.”

“We will continue to learn and collect information. Each time we go on track we are learning new things. The bike and Brett are clearly fast, he has qualified 2nd and 1st respectively but we need to change with the varied track conditions. We will continue to work hard to the pursuit of winning,” Konsky finished.

Penrite Honda’s desert team rider Callum Norton came away with a 4th overall in the MXD, after placing 3rd in Moto 1 and 6th in Moto 2. A very positive result for the young Victorian who has displayed consistency in both rounds and sits 4th overall in the championship with 8 rounds to go.

The team will now turn its attention to testing and preparing for the next round in Wonthaggi, Victoria on the 19th and 20th of May.