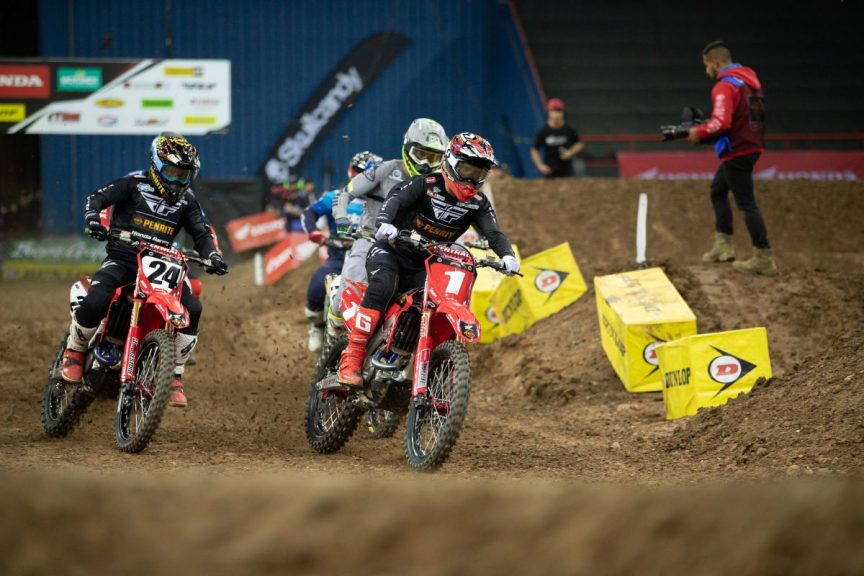 Just days after Round One of the Australian Supercross Championship in Brisbane, the Penrite Factory Honda Team went straight back into preparation for the second round of the championship in Adelaide this weekend. Team Director Yarrive Konsky’s vast experience has taught him that you can’t take too much away from the first round of any championship.

“The entire team is working towards a common goal and you can’t rest your laurels on one round of any championship. Racing provides you with the opportunity to identify your strengths and areas for improvement…everyone learnt a lot from Round One. Each individual rider strategised and planned their respective weeks and the team has worked selflessly to ensure the riders are as comfortable as possible prior to Round Two this weekend” said Konsky.

Justin Brayton decided to remain in Queensland following Round One to prepare for this weekend.

“I have based myself on the Sunshine Coast; the weather is consistent, which enables me to train as effectively as possible.  It’s always nice to a get race completed and whilst it was a successful weekend, I was able to identify are areas I can improve on.  I have spent the time focusing on those aspects ahead of Adelaide.”

Brayton praised the promoters of Round One and is looking forward to Round Two this weekend.

“Troy Bayliss Events did a great job of Round One…the track was impressive.  They made the most of the space they had and the racing was intense. We had a good night of racing and getting maximum points always helps your championship hopes.  Last year I didn’t take the overall in Adelaide, so it’s a round I would like to win.  It’s also the home state of my teammate, so at the very least I hope it’s one of us on the top step of the podium” concluded Brayton.

“I was bummed out! I wanted to win and I didn’t even make it on the podium.  We had the speed to race up the front, but I made some mistakes which hurt my overall finish.  I can’t make the same errors in Adelaide this weekend.  It’s my home town, but more importantly you cannot afford to give away points when the championship only runs for five rounds” said Metcalfe.

Metcalfe flew to the team’s home base in Melbourne to prepare and test for Round Two.

“We have all been putting in the time and effort, but we needed to refine the setup we were running. We spent two days on the chassis and I feel a lot more settled on the bike.  I only hope my results highlight the improvements we have made” concluded Metcalfe.

Satisfied with their bike setups, the two riders competing in the SX2 class have spent the week maximising their time on the bike.  Despite both riders taking heat wins, Blose and Oldenburg are chasing better results at Round Two.

“Round One didn’t go as well as I planned.  Everything was going well until we got the final. This week has been good.  I have had a lot of time on the bike and have had a good, consistent feel. We are ready to go racing” said Blose.

Oldenburg is also primed to show his full potential this weekend.  He has reflected on his performance at Round One and an extra week on the bike has been beneficial in acclimatising to racing in a new environment.

“My results at Round One were disappointing, as I believe I can run at the front.  I have put it behind me and my bike feels amazing!  We have had a solid week of preparation and I feel ready for the weekend.  I know there is only four rounds left, but with 10 final races remaining anything can happen.  I just need to focus on what the team and I are doing and try and make the most of each race” concluded Oldenburg.

For more information regarding Round Two of the Australian Supercross Championship in Adelaide this weekend, go to www.australiansupercross.com.au