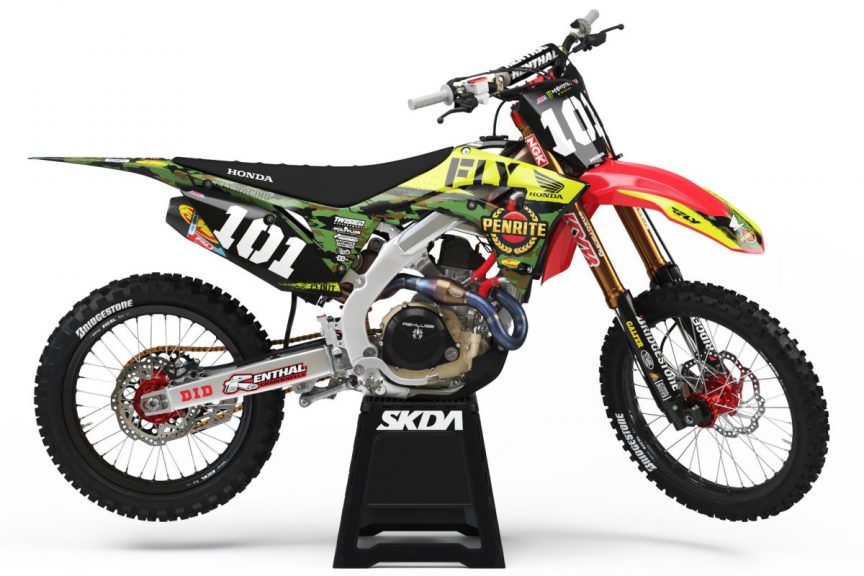 Penrite Oil started in 1926, its and Australian owned company with refineries in Victoria, Australia.  The family owned Lubricants Company is proud of its heritage. Penrite is proud to show their respects to the military as allies of America. Penrite Oil’s Jarrod Harding appreciates the efforts of everyone involved and believes this is a great representation of the alignment both countries have.

“Our troops past and present selflessly defend our freedoms and we are proud to honour them through the Penrite Honda Racing Team” said Harding.

“Australia and America are allies and they have one another’s backs” concluded Harding.

This weekend the team will show their respects by running two custom sets of graphics designed by SK Designs director Sam Morton and team owner Yarrive Konsky.  The team will run two different kits; the first of two will pay homage to the teams apparel sponsor – Fly Racing.  Fly Racing is also a primary sponsor of the AMA Supercross and Motocross Championship.  Yarrive wanted to show his appreciation to FLY for their continued support. The second kit will be similar to the team’s current kit.  As representatives of Honda Racing the team wants to maintain Honda’s primary red colours.

“FLY Racing has been a partner of our program for 7 years and we appreciate their willingness to support our championship pursuit’s in Australia and America.  Their devotion to Military appreciation week is evident in the riding gear they have created for all of their riders to wear this weekend”. Said Konsky.

The team has been working hard this week on and off the bike. Testing and training has gone well and the team aim to challenge for more top 5 finishes.  Mitchell Oldenburg believes the team is capable of place on the podium but may not be racing following a crash on Wednesday.  The team will make a decision in the morning.

“This week has been great, accept for a small crash I had; the team has also done a great job in showing their appreciation for the military.  Last week we showed that we have the bikes and speed to race upfront.  I know Luke and I are capable to challenge for a position on the podium and that’s what we are chasing, I am just not 100 percent sure I will be racing” concluded Oldenburg.

Round 6 of the AMA Supercross Championship will take place this weekend at in San Diego.  For more information go to www.supercrosslive.com or www.hondamx.com.au