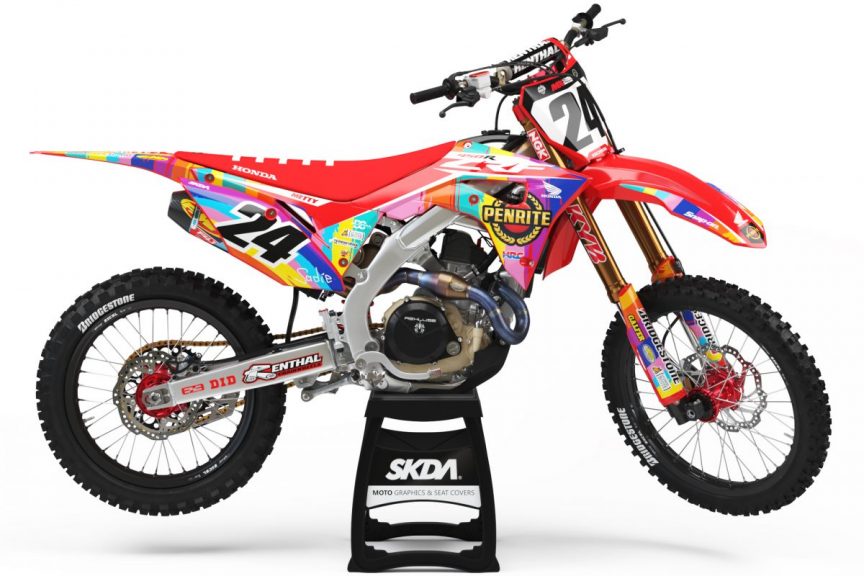 Children have been living in a world out of their control during the tough and uncertain times of this pandemic, so Penrite Honda Racing went to work, launching a colouring competition with a very enticing prize for the winners.

By the end of March, school closures were impacting 91% of the world’s student population and are still affecting more than 60%. These closures have had an impact. Pandemics are indiscriminate and nobody is immune to the stress that comes with a pandemic and related quarantining.

“We wanted to brighten children’s day to day living through some interactive programs and it was an overwhelming success. Art encourages children to think, dream and develop skills that give them confidence,” said Team Director, Yarrive Konsky.

Creativity is contagious and many families joined in on the activities. Brett Metcalfe and his two children, Mav and Nash entered the competition and the team decided to use their designs for one of the sets of graphics Metcalfe will race in the final round of the South Australian state championship this weekend.

“My kids will be blown away to see their designs on my bike. They have the ones they submitted on their walls in their bedrooms. During this challenging time this competition brought happiness to Mav and Nash and many of my friends’ children, I even created some designs but Yarrive told me to stick to racing,” Metcalfe said.

Over 300 designs were submitted by kids around Australia. Metcalfe will run 5 of the winning designs in the final round of the South Australian Championship.

SKDA director, Sam Morton transferred the designs on to his award winning SK graphics, enjoying the project as it reminded him of his childhood.

“I was always drawing bike graphic designs and I have been fortunate enough to turn my drawings into a business. Creativity is inventing, experimenting, growing, taking risks, breaking rules, drawing outside of the lines, making mistakes and having fun so it’s been a great competition to be a part of, the team really did a great thing to engage with children during these times.” Morton said.

The designs that were chosen for Metcalfe to race, belong to:

Keep an eye on the team’s social pages to see the designs in action.