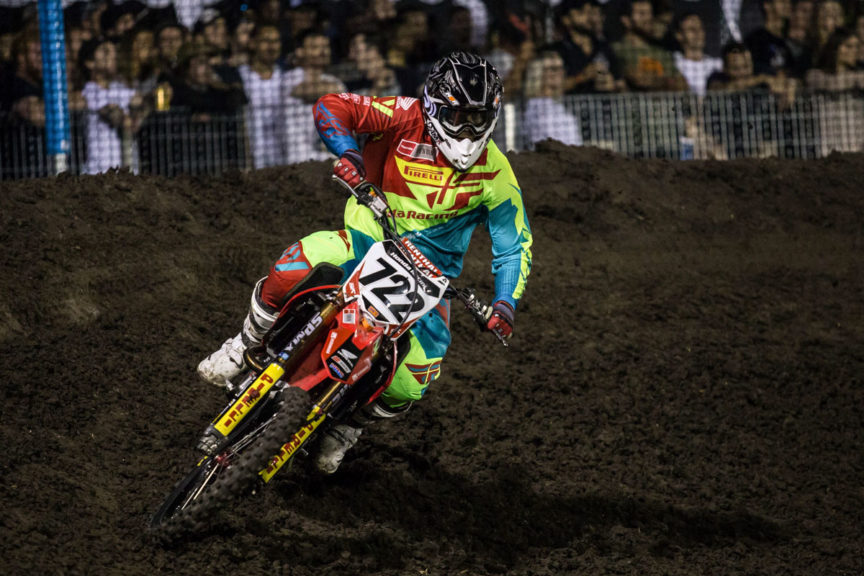 The Honda Genuine Racing Team has fortified its strength during the lengthy break between the first and second round. The much needed additional preparation time leaves the team enthusiastic and optimistic ahead of this Friday night’s second round of the Australian Supercross Championship in Toowoomba.

Despite success at the opening round, Team Manager Steve Powell said the team hasn’t rested on its laurels between rounds.

“Our testing schedule has been relentless. Brayton returned to America to continue testing and Enticknap and Decotis have worked tirelessly with the team locally to make vast improvements to their bikes.”

“I wasn’t myself at Round One- I was fatigued and made some costly mistakes. I am not making excuses, but in retrospect I should have flown in much earlier.  We have made the most of the break, which has led to improvements in both the motorcycle and my riding. We have a new engine and some other parts and the team has also flown in my mechanic.  I can’t complain and need to go out now and get the job done.”

Adam Enticknap (7DeuceDeuce) has been jet setting around the globe between rounds, as well as testing with the team back in Australia. As a result, he expects a much better result this Friday night.

“Round One was a new experience for me. It was my first real race overseas and I was feeling tired all night.  The boys down under are fast and I wasn’t settled.  I have had time to prepare with the team and the testing has left me feeling a lot more comfortable. I also flew to Sweden to race, so I feel a lot more prepared and ready to show what I can bring to the track!”

Current Australian Supercross Championship points leader, Justin Brayton flew back to America after Round One to continue testing and feels more race-ready going into Round Two.

“Following Round One I flew straight home to get some more testing done.  I only had three days on a Honda before we raced in Jimboomba, so I was obviously lacked preparation. Sinse then I have been testing with the factory and I feel a lot more comfortable.  I have also been working on my fitness to fine tune my body for Supercross. The track this weekend looks good and I can’t wait to race.”