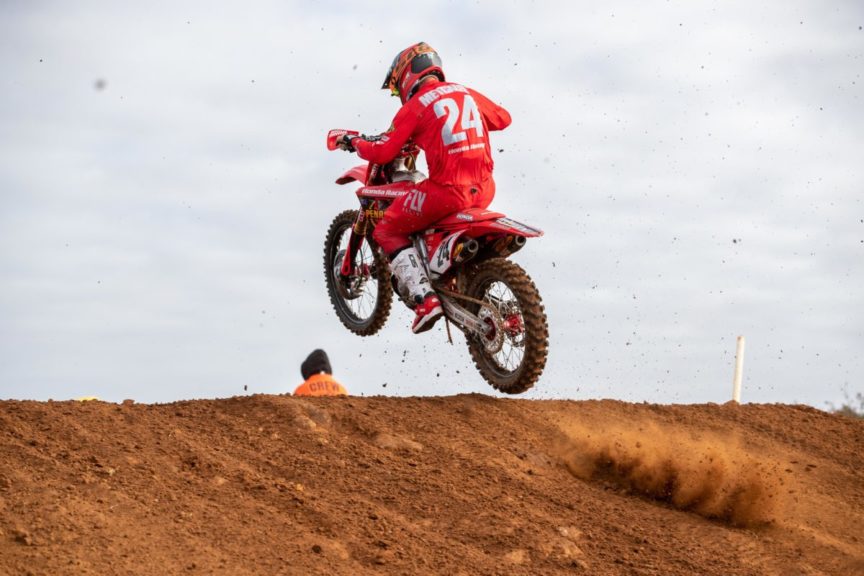 Penrite Honda Racing’s Brett Metcalfe is rearing to go this weekend at round 6 of the MX Nationals in Gympie, Queensland.

After two serious injuries earlier in the season, Metcalfe is very pleased to resume his normal training program and get back on the bike to make up for lost practice time.

“I have done more riding this past week than I’ve done all year on my practice bike, something that isn’t ideal but it’s great to feel more like myself again. I raced the state titles last weekend as we thought it would be beneficial to get some race practice under our belts before we head into round 6 this weekend.” Metcalfe said.

Competitors will race on a new track in Gympie, Queensland, which will provide added excitement to the mix.

“I can’t wait to line up this weekend on the new track in Gympie, from all accounts and from the photos I have seen, it looks great,” continued Metcalfe.

The Penrite Honda Racing team have been busy during the mid-season break, having competed in Finke and finalising their Supercross program. Team director Yarrive Konsky is pleased with the progress Metcalfe has made in such a short time and is eager to get back to racing the MX Nationals.

“We sent Scott (Metcalfe’s mechanic) to South Australia to spend time getting Brett back up to speed.  He has been there for two weeks and the progress reports have been positive,” said Konsky.

“Our goal is to see Brett on the top step of the podium before the end of the Championship. Racing with injuries has more than proved to us Brett’s determination to win and we all admire that!” Konsky concluded.

For more information on Honda’s Competition range, including the CRF450R – visit – http://motorcycles.honda.com.au