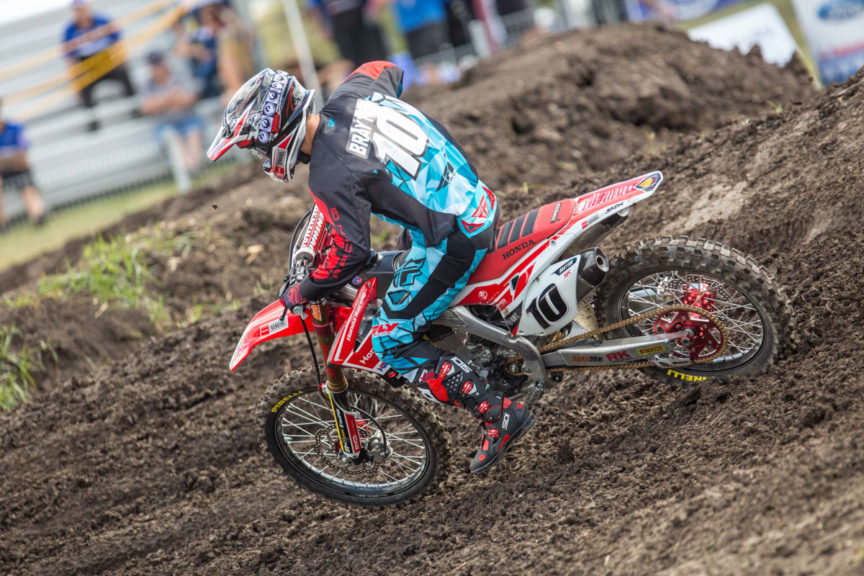 Justin Brayton rode within his limits on a demanding Jimboomba track to claim the win in round one of the Australian Supercross Championship. The Iowa native was satisfied with his opening performance.

“I am happy we took the win. The track became super slick which made it technical. I had to use every ounce of my experience and ride smart. If I pushed any harder, I could have ended up on my head”.

Brayton arrived in Australia just three days prior round one, which required a huge effort from the entire team to ensure every measure was taken to be adequately prepared. The collaboration between American Honda, Honda Australia and the race team worked like a well-oiled machine, with each playing an integral part in putting the program together.

Glyn Griffiths of Honda Australia is proud of everyone’s achievements. “It was a massive effort and the results are a great reward for the hard work everyone has put in”.

The teams second 450 pilot, Adam Enticknap was frustrated by his performance and has created a plan in preparation for round two. “Tenth was acceptable, but the team and I are better than that. I was tired, this is my first overseas event and I wasn’t as prepared as I should have been. The crowd and team are amazing and I feel so welcome. I will be doing my best to show what I can bring!”

Reigning 250 champion, Jimmy Decotis remains positive following his seventh place finish. “I made the most of a frustrating final. I got an average start and got caught up with some crashes and personal mistakes. I had to change my lines whilst passing riders and there wasn’t a lot of traction. I learned a lot from this race and will take the positives from the weekend and get prepared for round two. I know the speed is there, as I was second in qualifying. So it is onward un upward from here.”

Team Manager Steve Powell is happy with the results, but understands the realisation that this is the first of six rounds and the team has a lot of work ahead to stay on top. “With all things considered, this is a fantastic result! We have identified some areas of limitation and weakness that we will aim to improve. Overall, we will remain focused on our goal and keep progressing ahead of round two in Toowoomba” Next round – Toowoomba, October 14th.