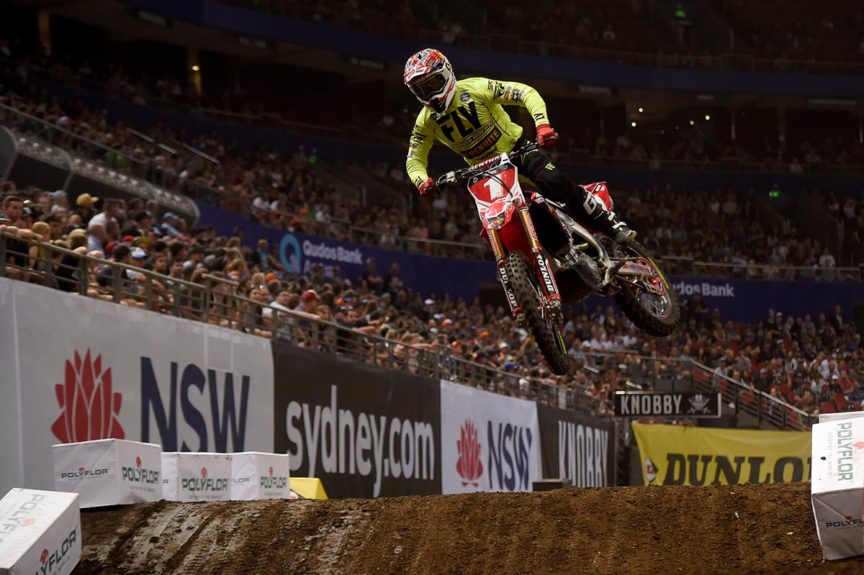 Brayton extends lead to 18 points in SX1. Blose takes a second and first respectively in SX2.

Penrite Honda claimed three podium finishes over the two nights of racing at rounds four and five of the Australian Supercross Championship.

DAY ONE (Round Four)
Despite a strong performance in his qualifying and heat race, Justin Brayton’s first night did not go to plan. The reigning champion and current points leader got a great jump out of the gate, but crashed in turn one of the main. He resumed the race and crashed two more times, before settling for 8th overall.

“The first night was a difficult one to accept. We had great speed and I felt confident. After the first turn crash the bike was a little twisted and I rode as well as I could to salvage points. You can’t afford to make a mistake in these indoor events with such short lap times!”

It was a similar night for Brayton’s teammate in the SX1 class, Jesse Dobson. Dobson rode well in his heat and semi, transitioning easily to the main event. However, Dobson also crashed in the final, resulting in an injured hand. He showed grit and determination to resume the race in pain, eventually finishing a credible ninth. Dobson tried qualifying for the second night, but the pain made it too difficult to ride. Subsequently, the team and Jesse decided not to risk further injury for Day Two of the event.

“It’s tough when you are a racer and you can’t race. It’s been a trying year. I will sit down with the team and discuss the final round with them and make a decision towards the end of next week.”

Delcon Civil backed Penrite Honda’s SX2 entry of Chris Blose. Blose was recruited after the teams Championship SX2 leader, Gavin Faith departed the series after fracturing his wrist. Blose only flew in seven days ago and jumped on a Honda CRF 250 for the first time last Monday. After three extensive days of testing, Blose settled on a set up that proved competitive. He took second place on night one, including the fastest lap of the 250 and 450 finals combined.

“The first night was hard! I was battling for the win and got held up by a lapped rider. It happens, but it was tough as I thought we could contend for the win.”

DAY TWO (Round Five)
Brayton quickly put the disappointment of night one behind him to claim the second fastest time in super-pole on night two. With the non-title contenders of Anderson and Wilson running strong, Brayton rode a smart and calculated race to take third overall. Consequently, Brayton now has an 18 point advantage heading in to the final round.

“The second night was a lot better and I raced with the championship in mind. I didn’t get the best start and I needed to change my strategy and race for the overall championship.”

Blose went from strength to strength on day two. He qualified first and won his heat race, before taking the chequered flag in the final. All in all, it was a dominant performance.

“On the second night I came together with another rider and crashed. I got up as quickly as I could and went to work again. I was able to get into the lead and claim the victory. Overall it’s been surreal; I landed seven days ago to ride a bike I had never ridden or raced and worked with a team I didn’t know. What they did was nothing short of amazing. The Honda 250 is awesome and I am glad I could put it on the podium both nights.”

Chris Blose and Gavin Faith combine have put Honda’s 250 on the podium in 4 of 5 rounds.

Team Principal, Yarrive Konsky was happy with the teams results.

“You win championships on your worst days. Justin regrouped and focused on the bigger picture- that’s what champions do. This weekend he proved that he has the speed to run with two of the best SX riders in the world. Although poor starts held him back, Justin’s experience and maturity enabled him to settled down and focus on extending the points lead. Chris was amazing! I was nervous, as there were many questions surrounding our choice of replacement. He was fastest all weekend and his results were extremely rewarding. The team did an unbelievable job of ensuring he was comfortable and I want to thank Tim Vare for his outstanding efforts in helping to accommodate Chris and Buddy Brooks for his continued support.”

The team has one round remaining, with the championship concluding next weekend in Queensland, Jimboomba – www.australiansupercross.com.au 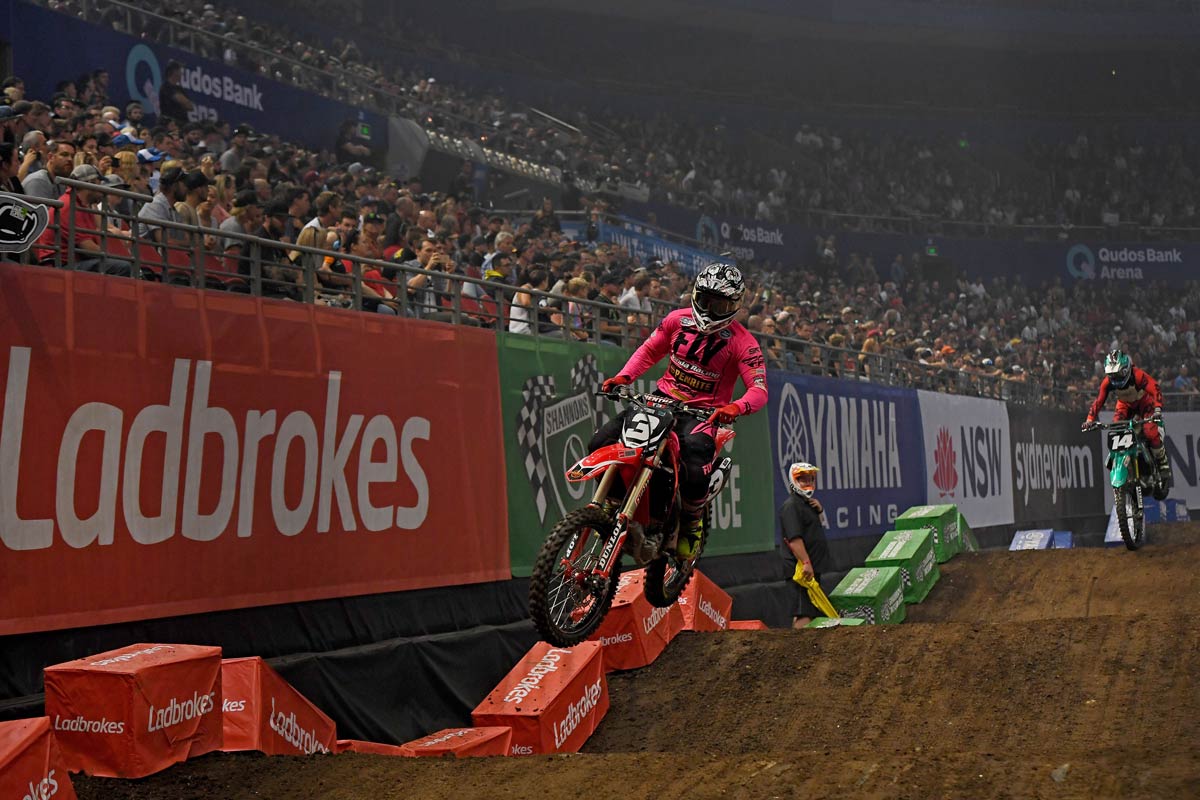 Final Round Showdown – Two championships will be decided

Brayton will be chasing his second consecutive SX1 championship in the final round of the Australian Supercross Championship in Queensland this coming weekend. Although Blose can not contend for the SX2 championship, Honda has proven that their 250 is more than capable of winning races, taking 4 podiums in 5 rounds. Blose will again line up in an effort to claim a fifth 250 podium for the Delcon Civil backed Penrite Honda program. Tickets are still available. (Photo Credits – Jeff Crow)