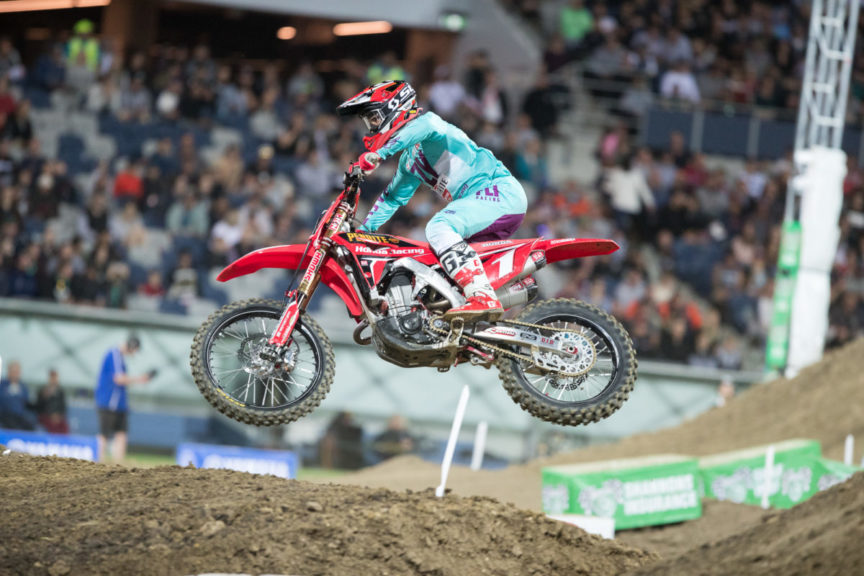 Penrite Factory Honda’s Brayton and Metcalfe continue their successful charge in round 3 of Australia’s 2018 Supercross Championship.  Taft had an unfortunate finish to a great night.

The third round of Australia’s Supercross Championship was witnessed by a packed crowd in Geelong, Victoria. Penrite Factory Honda’s Brayton and Metcalfe raced like warriors to take 1st and 2nd respectively for a third round in a row. Bradley Taft the teams sole 250 rider took 4th overall after a crash in the final race robbed him of the overall. Round 3 was run over a 3 race final format.

In race one Brayton took the holeshot and raced to a commanding win over teammate Brett Metcalfe.  In race two Brayton was punted off the track by Reardon.  Coming from last place Brayton put on a dominating display of riding as he raced back to second place.  In the third and final race of the evening Brayton again grabbed the holeshot and raced away to take the race win and the overall for the third round in a row.

“Wow, this round really tested me.  I didn’t ride all week.  I got sick, really sick and I genuinely didn’t know how tonight was going to play out. Whilst the second final wasn’t ideal I will admit that I enjoyed the challenge of racing through the field.  Metty is riding well and I am glad that we have placed Honda first in every final”. Said Brayton

“There is still a lot of racing left and a lot of points up for grabs, you can’t give anything up in this championship and that’s something that’s exciting for the fans and nerve wrecking for the riders.  With 6 races across the two final rounds I seriously need to maintain my focus and commitment.  We will keep doing what we are doing, the team is working great and the new 19 year model Honda’s are unreal” 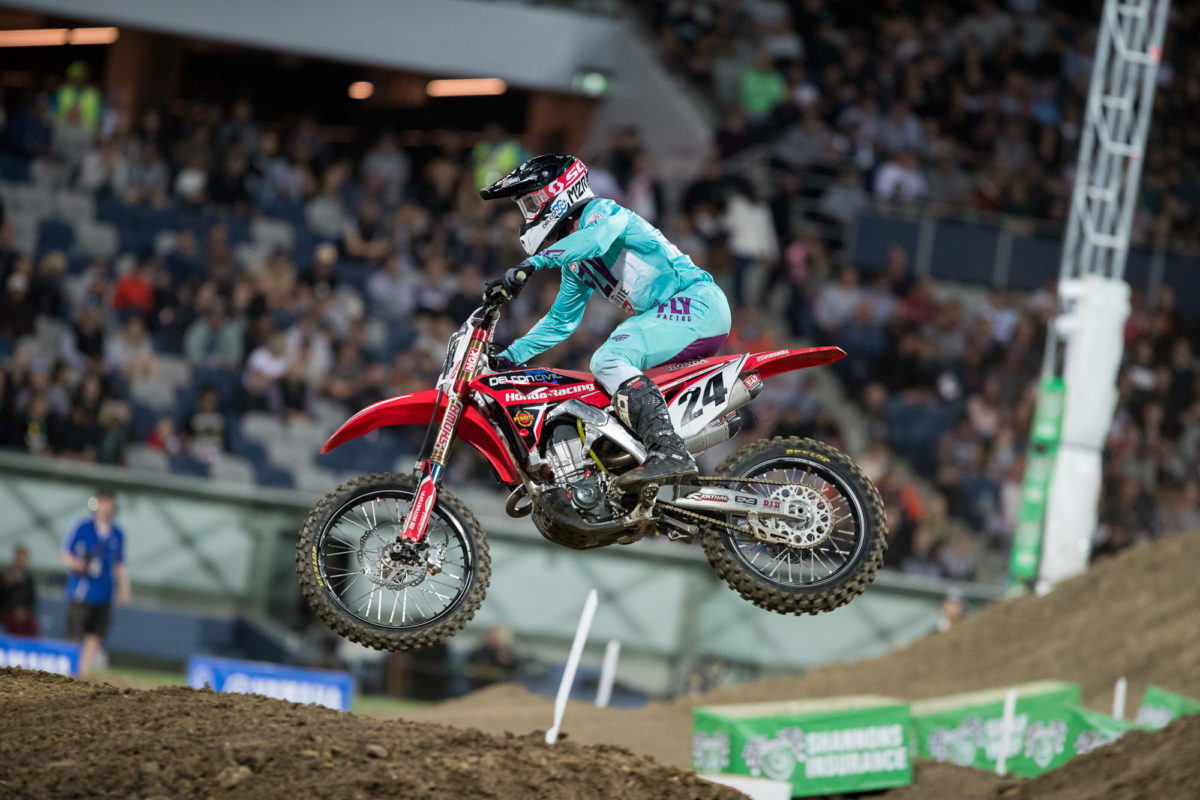 Brett Metcalfe didn’t let a crash in his heat race deter his desire to win.  In the first of three finals he pushed through to take 2nd.  In second final he took his first win of the championship after his teammate (Brayton) was made to race through the entire field.  In third final he finished 2nd.  The points from these three finals gave him 2nd overall for a third round in a row.

“I am happy to take another 2nd but I really want to win.  I am happy that my teammate is winning; it’s fantastic for all of our sponsors but I want to win and that’s what’s motivating me each week. I know we have the bike, Justin’s proving that.  I just need to keep working at it”. Said Metcalfe. 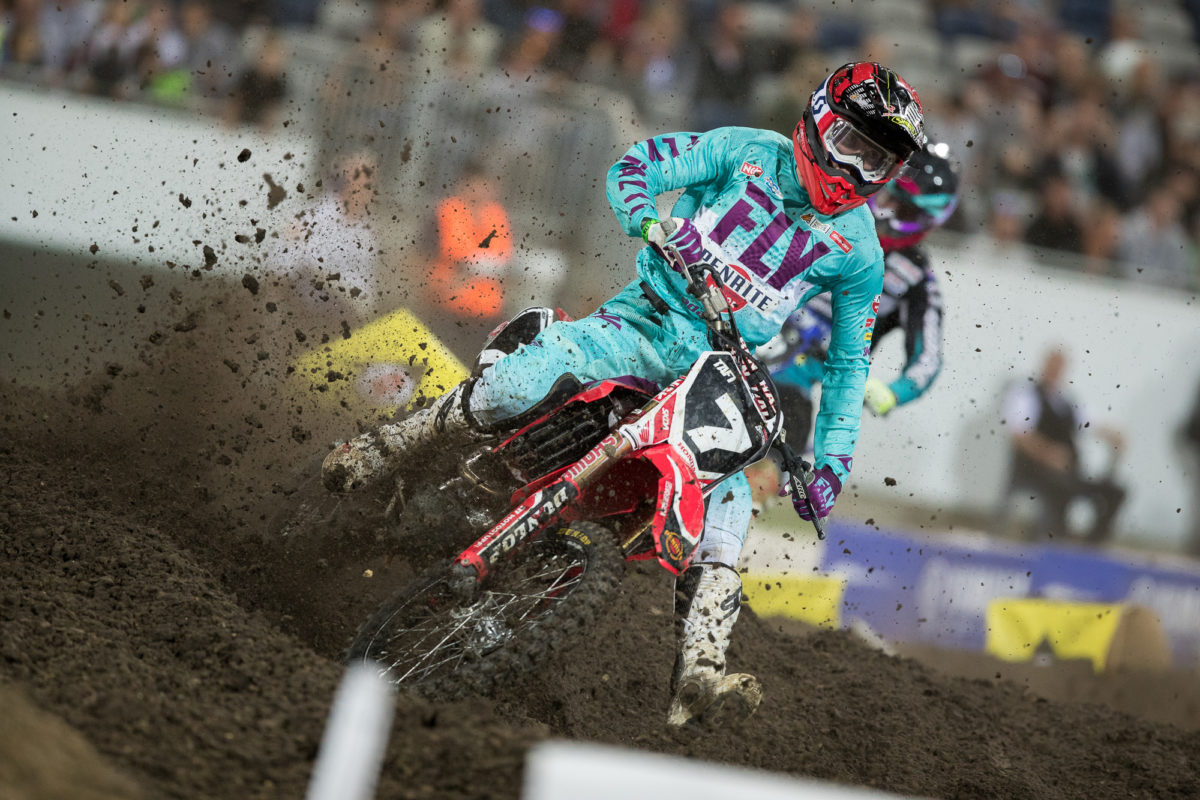 Taft qualified 1st and won his heat race. In first of three finals Taft’s talents were tested as he had to fight back from a mid-pack start.  He pushed through to finish 3rd.  In the second final he had to push through again. He set the fastest lap time on his way to 2nd.  Going into the last of three finals Taft had a 2 point advantage over the entire field.   With the overall in his sights Brad crashed with a lap to go in the last race, losing the overall.  The crash not only cost him the overall but a podium position. Taft finished 4th and currently sits 5th in the championship, 3 points shy of 3rd.

“Tonight is tough for me to accept.  I made a small mistake which cost us all greatly.  I wasn’t trying to do anything reckless; we were racing for the overall.  I know the team, the bike and I are capable of winning and I will turn my attention to the final two rounds”. Said Taft